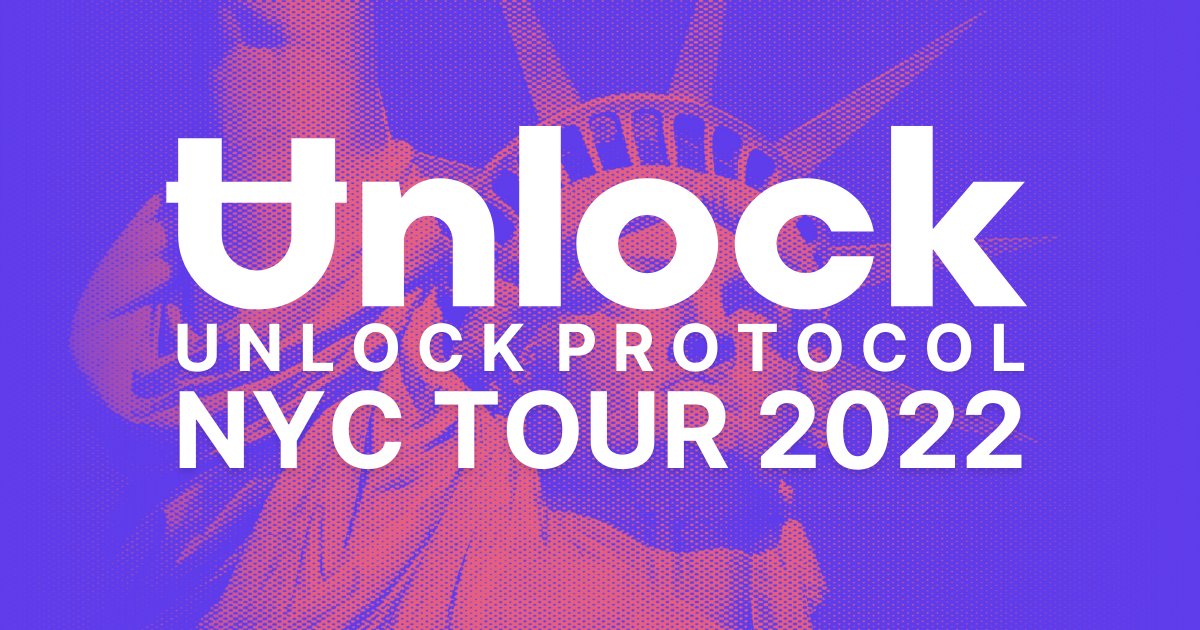 Wowsa. What a week in New York City — it seems the entire web3 industry was there in one form or another between June 20th and June 26th. There was so 👏 much 👏 going 👏 on 👏.

Here are some of the highlights from the events the Unlock Labs squad participated in.

Collab with Superfluid and Privy around NFT.NYC

If you don’t yet know them, Superfluid is a token standard to describe programmable, composable and modular cashflows and execute them automatically on chain, while Privy is a simple API that enables you to manage user data off-chain (e.g. their name, email address or KYC information). Both are great partners to Unlock, and we were thrilled to team up with Superfluid and Privy to co-host a happy hour at Casa Bocado in Manhattan, with stellar conversation, incredible food, and tasty beverages. Big thanks to everyone who came out to connect up with us! 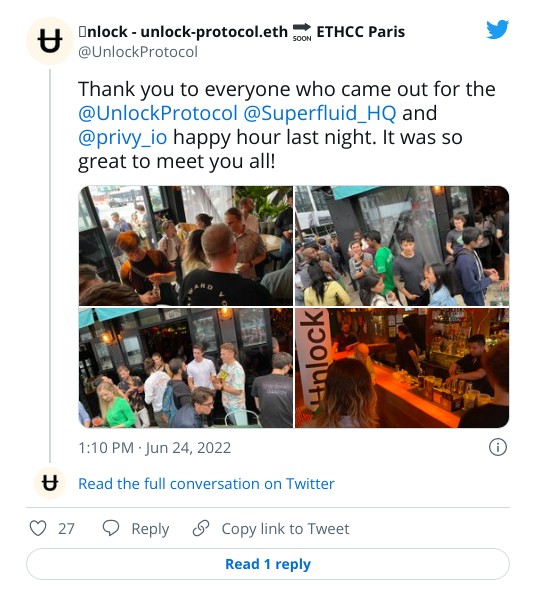 We experienced ~ vibesIRL ~ with Developer DAO 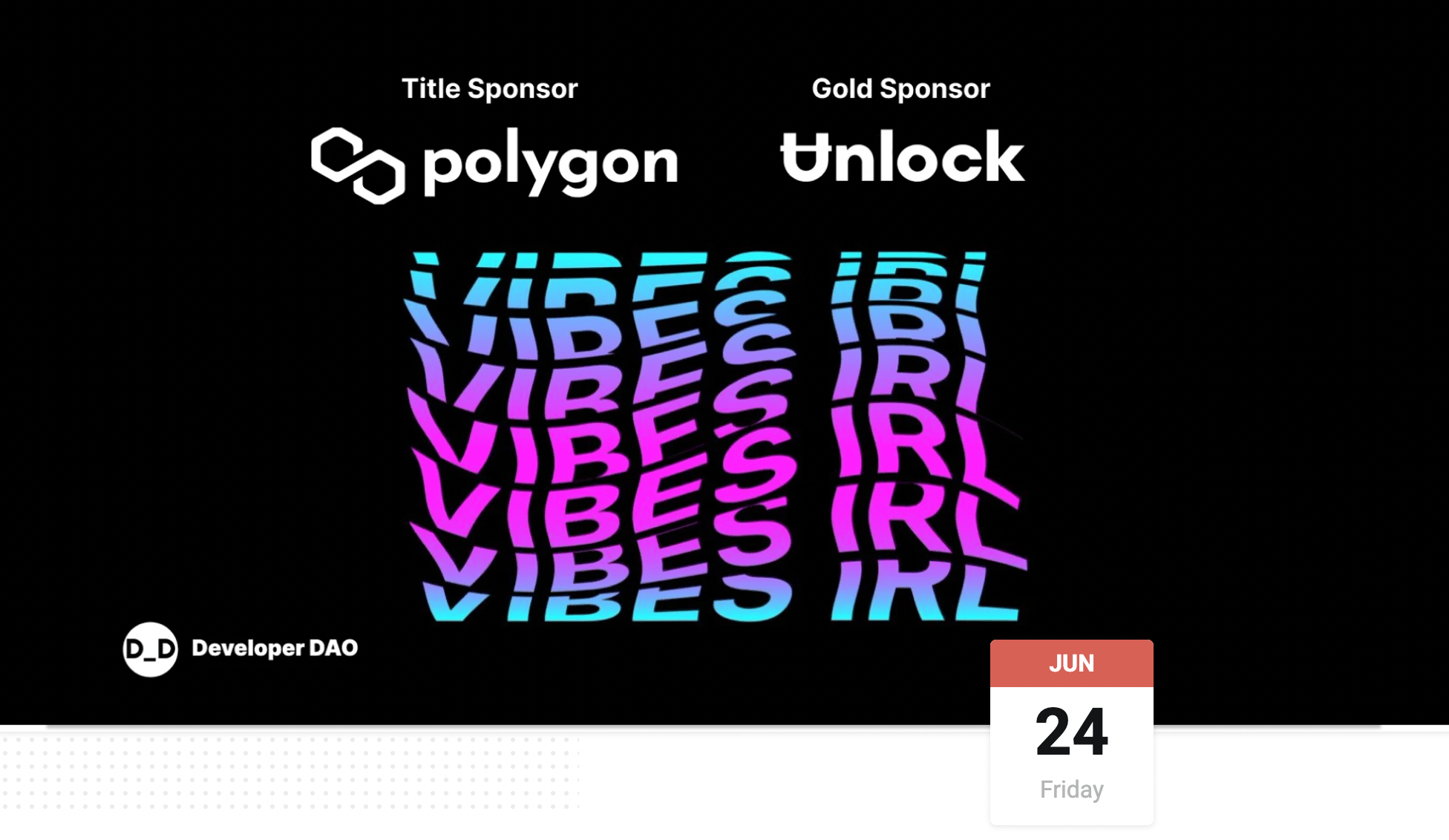 Developer DAO exists to accelerate the education and impact of a new wave of web3 builders. Unlock and Polygon teamed up to help sponsor Developer DAO’s ~ vibesIRL ~ event during blockchain week in New York at Barcade! A great time was had meeting new members of the developer community and reconnecting with old frens. Looking forward to the next one! 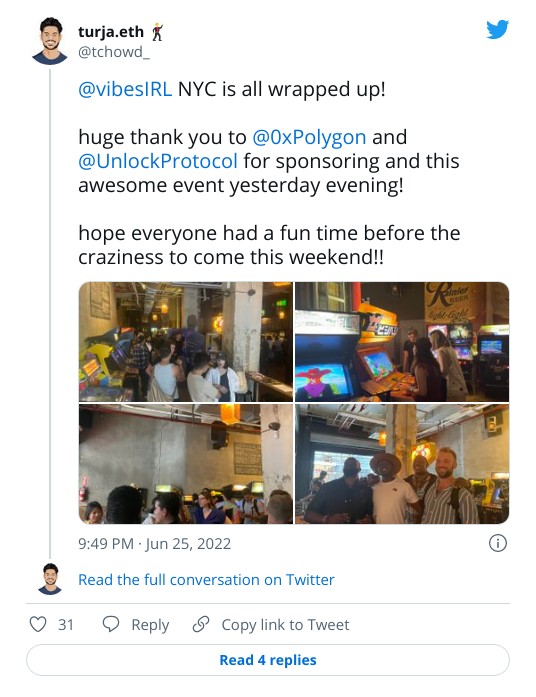 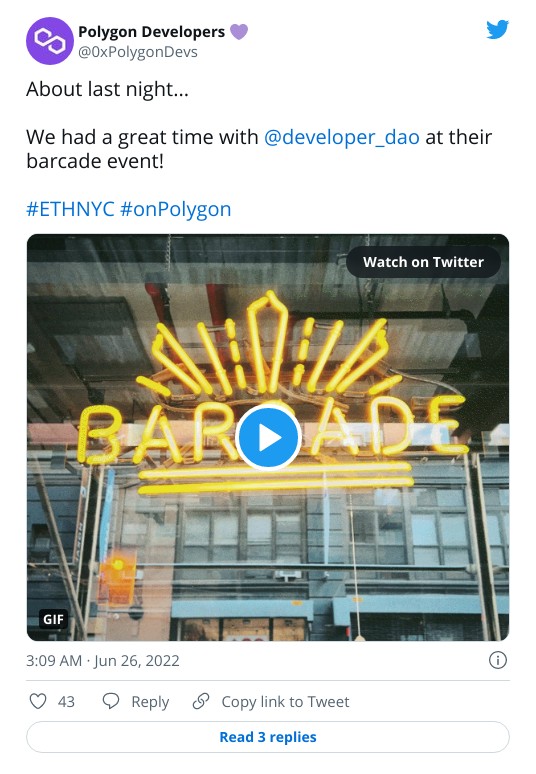 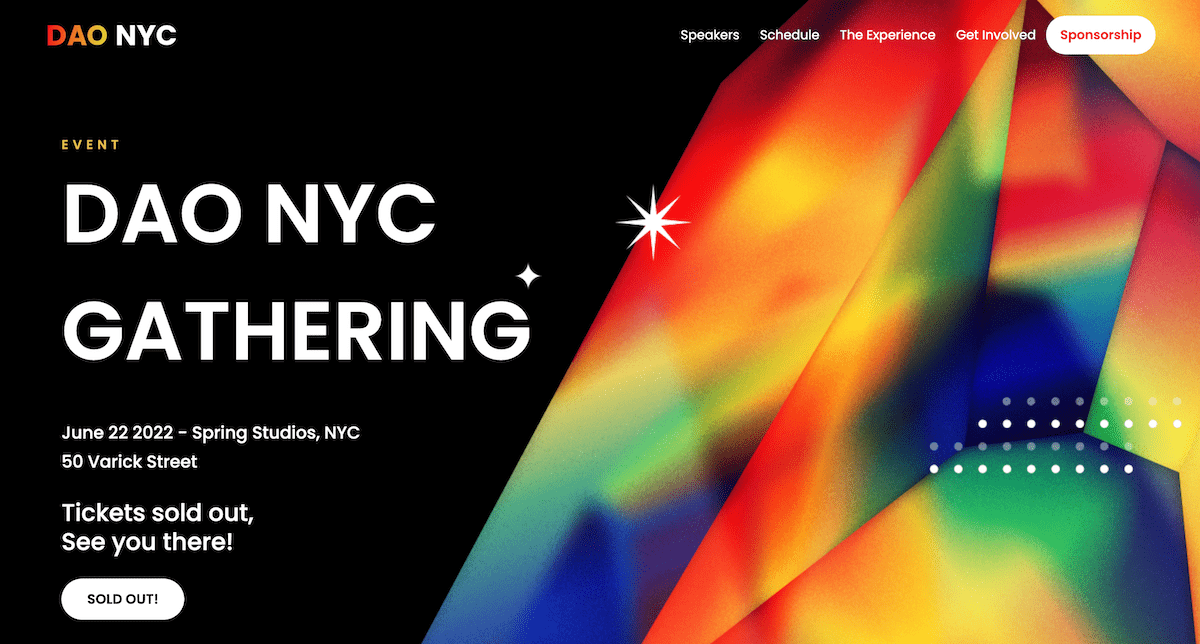 DAO NYC was a one-day event halfway through blockchain week, and it has immediately rocketed onto the shortlist of events that Do It Right. From the flawless execution of the event production and logistics to the strong diversity of voices from all across the web3 ecosystem who shared their time and expertise, DAO NYC was a delight. Big ups to the Tally.xyz crew that pulled it together. The event was SOLD OUT, with over 500 attendees.

Unlock participated in multiple ways: as a sponsor, as the provider of NFT ticketing for the event, and Unlock’s CEO and Founder Julien Genestoux participated in a rich conversation discussing on-line credentials on the “Credentials and Data in DAOs” panel.

Plus, the views were amazing. 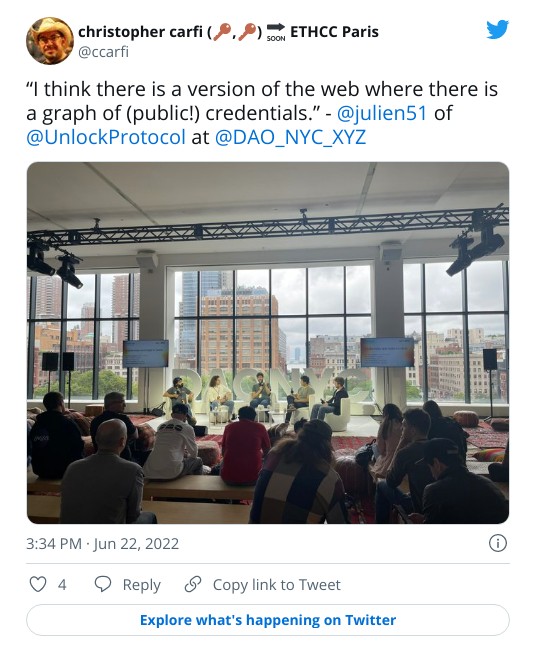 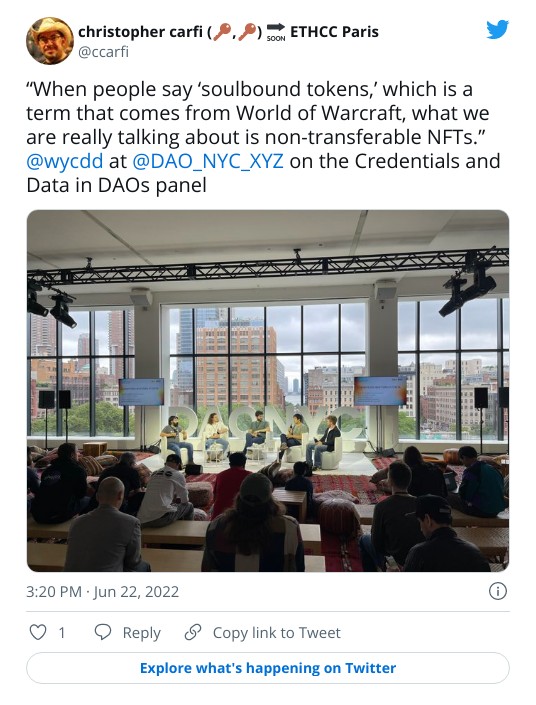 In addition to Julien’s panel, DAO NYC’s programming had a wide array of panels that hit on topics that went much deeper than the typical “wen lambo?” web3 conference fare.

Kinjal Shah, Manasi Vora, Medha Kothari, Karima Williams and Gabrielle Micheletti discussed the importance of doing the work to ensure that web3 represents all its participants, and not just the stereotypical tech bro / crypto bro point of view. (Important note: Major kudos to the DAO NYC team for not just having one side panel on this topic at the end of the day in an out-of-the-way conference room, but instead weaving diverse viewpoints into the speaker roster from the get-go across the board. See for yourself here. This is the group to learn from.) 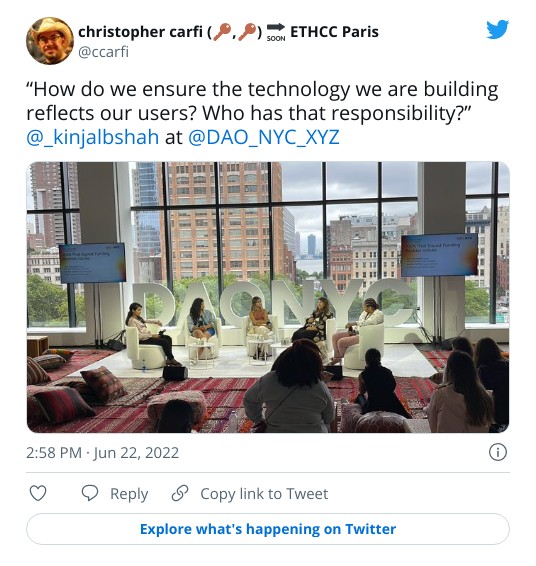 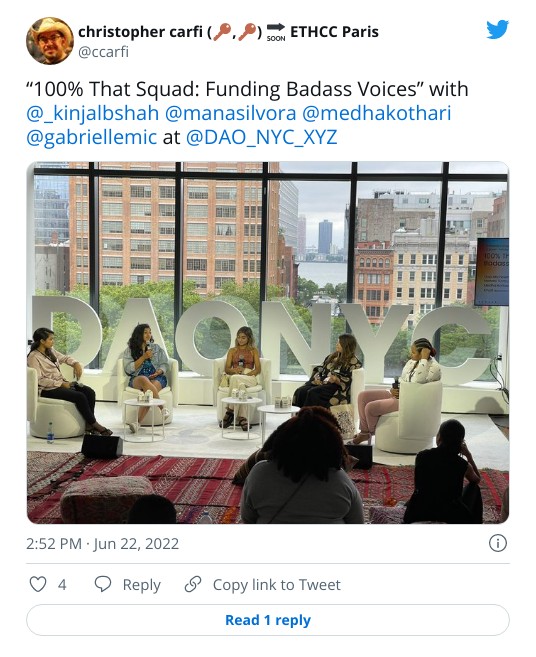 In working in and building online communities and community strategies throughout my career, I also wanted to note the conversation in the “Communities in web3” panel was all spot-on and another major highlight of the day. 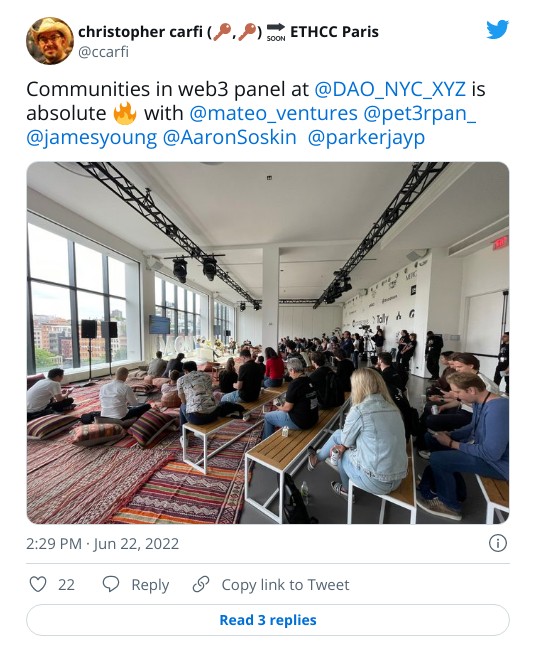 Again, hats off to the DAO NYC conference team. Cannot wait for the next one! (The conference organizers have assured us that the videos will be live soon. We’ll post links from the @UnlockProtocol Twitter handle when they do.)

The crowning event for the week was ETHGlobal’s ETH New York hackathon. Over 1500 participants showed up for an intense, three-day hackathon building on the core protocols in web3. Unlock, of course, was a sponsor.

At the end of the weekend, and after the final round of judging, three projects and teams stood out and came away with prizes for the most impressive solutions built using Unlock Protocol. They were: 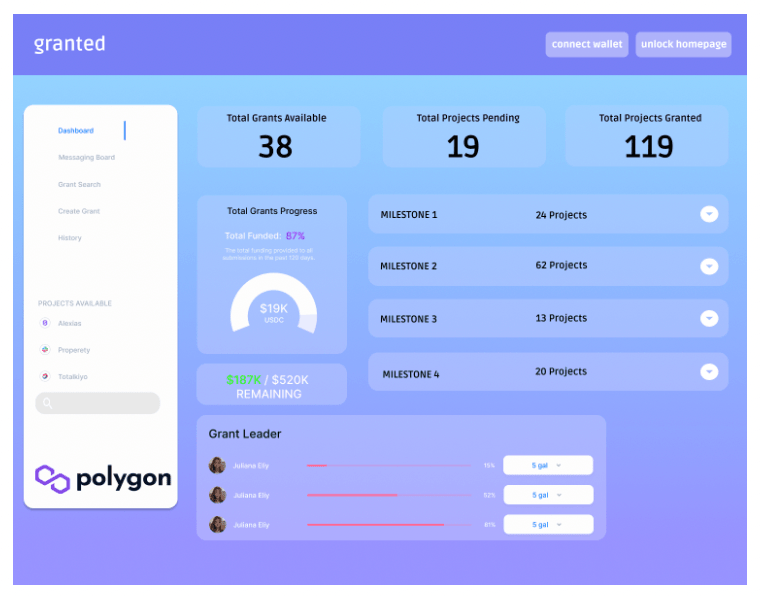 Granted is a milestone-based granting platform for sponsors and developers to issue and apply for grants. Granted streamlines the grant process by notifying and tracking all the progress on projects being built so that both the developer and sponsor have open, bidirectional communication and provides transparency to both the grant sponsor and the grantee.

The platform provides a bird's eye view of all granted projects, categorizing them by the milestones completed, making it easy to keep track of the progress of a grant program. 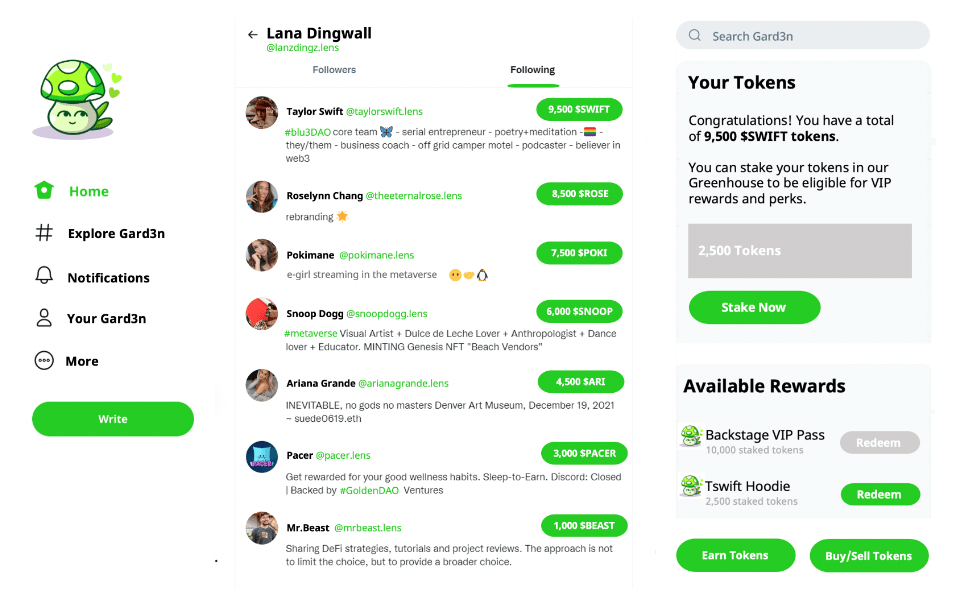 Gard3n is a public goods social engagement platform built with Lens, Unlock Protocol, and other technologies that rewards creators, and their fans / communities to help cultivate a new form of creating and interacting with shared prosperity at its roots. Gard3n nourishes the relationship between creators and their communities by helping them connect more easily while building shared Gard3ns (micro communities powered by social tokens). Fans are rewarded for their time, dedication, and engagement and are able to receive and stake their social tokens allowing them to unlock exclusive drops, NFTs, perks, and benefits based on the creator. Creators are easily onboarded to web3 with easy to use tokenomic templates to help them get started and are rewarded through the buying, redeeming and trading of their social tokens. Creators can create multimedia content in a user-friendly UI experience. Both are rewarded by feeling valued and supported by the other.

NFTicket is a hackathon project for online ticketing. The front end of this project allows a user to log in to their Metamask wallet as well as be able to view NFTs given to them hidden behind an Unlock paywall. There are three smart contracts, one for each section in the stadium. Users have the ability to mint a ticket and pay a stable USD rate in ETH pulled in via a Chainlink price feed. Scripts are then run to deploy the contracts, create (mint) a ticket, create the metadata, and to set the token URI. The metadata includes the section, seat, row, link to the image on IPFS and other important information for the game. This JSON is also uploaded to IPFS. After the game, the user is airdropped an Unlock NFT from the event organizers with a game highlight.

All three of the above were amazing projects, especially when one considers they were conceived, built, and delivered all in under 72 hours — oftentimes by teams where the members had never met each other. Great work, ETHGlobal hackers!

And with that, that’s a wrap. Want to follow up or learn more about any of the above? Hit us up in the Discord! Imma go take a nap…