Targeted advertising was the original sin of the web. For years, the accepted business model for consumer startups was to grow exponentially at breakneck speed. Their services were optimized to lure users into spending as much time on them as possible, as regularly as possible: an addictive behavior euphemistically referred to as “engagement”. And because highly targeted advertisements were worth more, those same services were incentivized to collect as much intimate information about their users as possible.

It’s called surveillance capitalism. The bad news is that most modern internet services have been built this way. But the good news is that the pendulum is swinging.

Across the world, people — and their governments, through legislation like GDPR — are demanding more respectful services, with hard limits on user surveillance and targeted advertising. It’s become common knowledge that if you’re not the customer, you’re the product being sold. And in a world where targeted advertising has helped swing elections and destabilize societies, the tide is continuing to turn.

Startups, publishers, and creators need a strong alternative that meets these new user demands. At Unlock, we’re building a new way for them to make money on this new, more respectful web.

Unlock is a decentralized protocol, built on the Ethereum blockchain, that will allow any creator to charge for access to their work. There’s no company standing in the middle, choosing who can monetize or be discovered, and there’s no need to gather any personal data at all.

While we’re building this protocol, there’s no need to adopt our code or services to use it. It’s free to integrate it into your websites and products, just as other open standards like HTML or email are, and we don’t take any kind of cut from any transactions. In fact, by design, we can’t. Our aim is to set the standard for services that use the protocol, and kickstart a rich ecosystem of developers, vendors and customers.

While you can use our services, all our code is open source and free to self-host —which is why today’s release is so important.

Today we’re releasing our proof of concept for a decentralized paywall based on the Unlock Protocol.

This first release is aimed at technical, blockchain-aware web publishers whose audiences are also already using decentralized apps. Each of these users has probably got Metamask installed in their browser. They’re early adopters at the frontier of the decentralized web.

These publishers can create a lock, and set a price for content that is protected by it, as well as how long customers will have access to it for. Then, using a few lines of code, they can embed an easy-to-use paywall which uses that lock anywhere on the web. Finally, users can buy a key to unlock the lock at the price the publisher set, for the duration publishers allow. 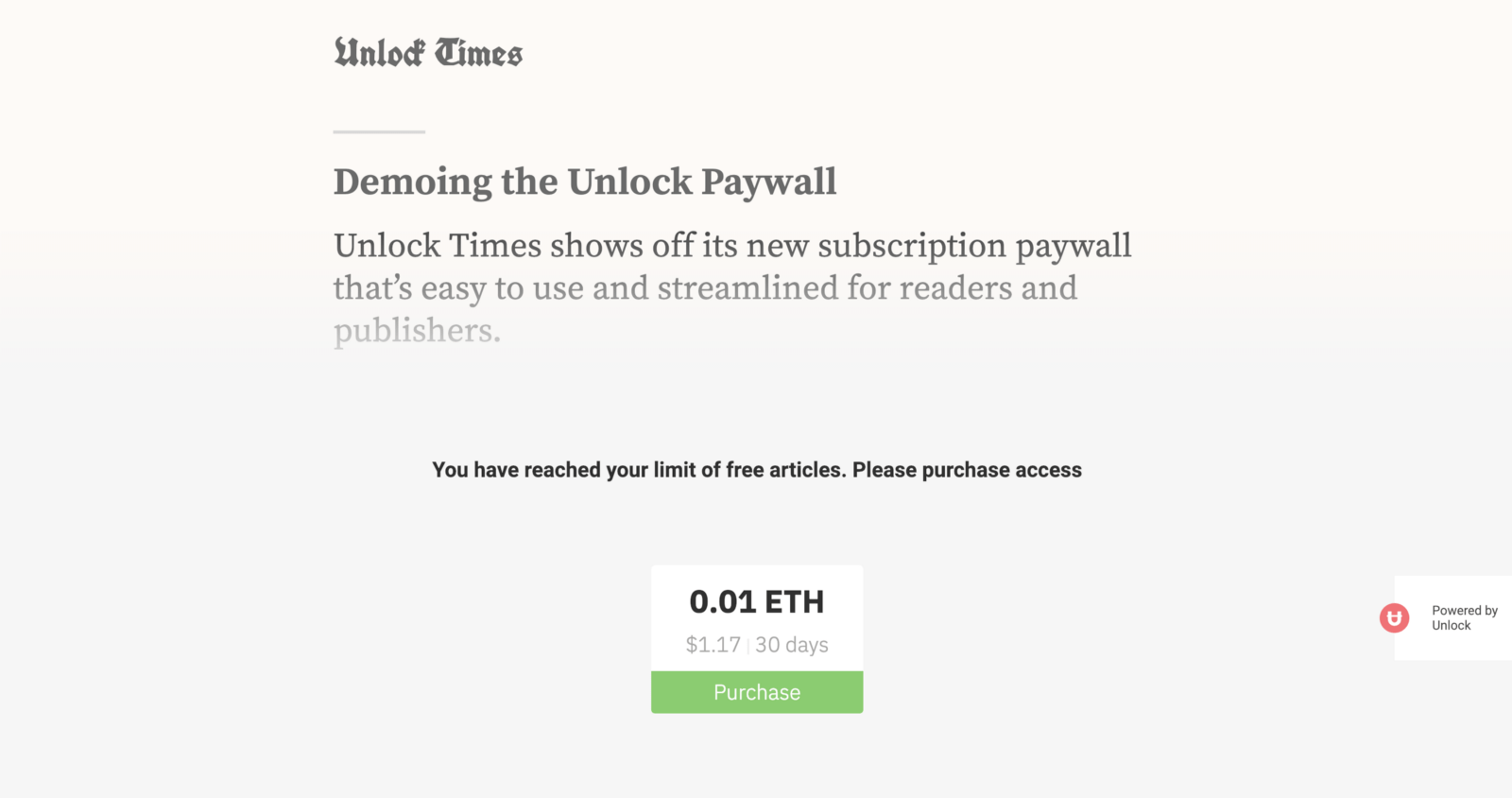 Of course, it’s early days. We don’t recommend using this at scale quite yet. And it’s limited to users who are au fait with cryptocurrencies. But we think it’s an exciting first step.

You can deploy your first lock right here. If you decide to embed it on your website or blog, please drop us a line. We would love to learn from you.

(Also, this goes for any decentralized app, but please make sure you withdraw from your lock fairly regularly. Funds are safer when they’re stored in a wallet than sitting on a smart contract.)

You can purchase a key to a lock on this test blog post by Julien or this one by Ben. We’ll donate double the proceeds from any tests and send them to She256.

The genie isn’t getting back in the box. Anyone who reads a newspaper or stays on top of Twitter knows that the prevailing business model of the web will change. It’s up to all of us to try and make it one that works for everyone, instead of a small number of gatekeepers. This release is our first step on that path.